A Multinational University in Central Asia

It’s the early 1990s and 15 new countries have emerged from the colossal historical moment that was the fall of the Soviet Union. Some of these new countries have never experienced statehood with their current set of borders before – including the five Central Asian nations of Kazakhstan, Kyrgyzstan, Tajikistan, Turkmenistan and Uzbekistan.

With the collapse of a huge unified political and economic system, questions of nationhood and national culture exist alongside a great number of urgent problems for these new countries. Unemployment is growing – as much as 30% in some countries –  and as many as 40-70% of the population are falling below the poverty line. How can the new national governments create economic opportunities when jobs have vanished overnight?

And yet at the same time, the new nation states inherited a legacy of well-developed social infrastructure that was particularly strong in healthcare and education. In Central Asia, for example, the first universities and Academies of Science (research institutes) were created during the Soviet era. Whilst the region has an incredibly rich heritage of learning and discovery stretching back more than a millennium, the 20th century saw the founding of the first formal institutions of higher education here.

It is into this context of economic crisis but highly developed education and social institutions that the University of Central Asia (UCA), a new institution equally based in the former Soviet republics of Kazakhstan, Kyrgyzstan and Tajikistan in Central Asia, came into being. And it was UCA’s story that the university’s Chair of the Board of Trustees Dr Shamsh Kassim-Lakha came to share with a large audience a joint CIHE/Munk School seminar held at OISE on March 2, 2018.

The story of the University of Central Asia

From 1995, agencies of the Aga Khan Development Network (AKDN), a major international secular private foundation with a presence in 30 countries worldwide, began working with the Central Asian governments. At their request, agencies of the AKDN began to provide food assistance, education, and financial services. As the 1990s progressed and the economic situation stabilized across the region, education rose up the agenda as a priority area. A successful Humanities Project, initiated in Tajikistan in 1997 under the auspices of AKDN funding (and still running today), showed that innovation in higher education could work.

A key aim of the UCA is to “create job creators, not job seekers”, according to Dr Kassim-Lakha. UCA is striving to fulfil this mission in a number of ways:

Across all its activities, UCA is striving to engage the communities and countries around it. This ranges from a new Mountain University Partnership linking up UCA to existing higher education institutions in the towns it is operating in to substantial financial support for the majority of its undergraduate students.

The cost of creating a new university

Even though tuition fees are minimal compared to other higher education systems – the local equivalent of US$5,000 plus $3,000 for accommodation and living costs – this is well beyond the means of most prospective students. Huge financial subsidies mean that most students are only paying a fraction of the true cost of their education, which Dr Kassim-Lakha put at $28,000. 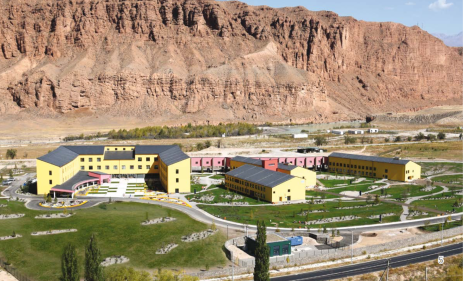 A huge amount of money has been put into the UCA initiative. There’s the financial subsidies for students, the cost of construction – the campuses have each cost nearly $100m to build – before you start to account for ongoing running costs.

Some of that cost has been met by generosity from Canada. To date, around C$20m of funding has been channeled from Canadian government agencies and non-governmental organizations into the creation of UCA, and Dr Kassim-Lakha expressed the university’s deep gratitude towards the Canadian people for this support. As well as direct funding, there are already concrete partnerships in place with the University of Toronto, Seneca College, University of British Columbia and the University of Victoria, each supporting UCA to develop a specific area of its curriculum.

Nevertheless, and perhaps understandably, working out how the university will be financially sustainable in the future is the issue Dr Kassim-Lakha said that keeps him up at night.

In the very specific former Soviet context it is based in, there are also potential challenges arising from an autonomous university attempting to set its own future direction within national higher education frameworks that remain heavily state-centric and bureaucratized.

And actively choosing to build a tri-campus university in small and remote mountain towns, as UCA has done, adds another dimension to the challenge. The guiding rationale for doing so – to reduce political, social and economic isolation – means that the university and other AKDN agencies are not just building a university, but a whole framework around it: from providing continuing education courses to qualify local people to work on the building sites to creating physical infrastructure such as building roads and pipelines.

UCA is an incredibly ambitious and exciting new endeavour. If the quality of its graduating students – the first of whom will reach the workplace in 2021 – come anywhere near matching the quality of financial investment and effort placed into creating UCA, then the results could be transformative for the mountain societies and the countries they are located in.