Is England’s Post-16 Skills Plan on the right track? 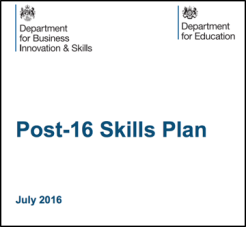 In 1935 the President of the UK Board of Education averred:

It has, I believe, been an old complaint among many concerned with the technical side of education that that part of education has been the Cinderella. Well, the Government is determined that even if there was any truth in that in the past, there shall be none in the future.

The UK Government’s recent Post-16 Skills Plan for England is its most recent attempt to bury vocational education’s Cinderella. It seeks to do so by reducing the overlap of vocational, general and academic education by establishing 2 distinct parallel tracks for pupils after age 16: a technical option and an academic option.

a “race to the bottom” can develop in which awarding organisations compete to offer less demanding qualifications which are easier to teach and easier to pass, driving down standards and rewarding poor quality.

The UK Government plans to rationalize vocational qualifications by limiting those eligible for public subsidy through its government-backed student loans, aiming for a single qualification in each particular area.

The Government also plans to establish 15 technical education routes which group occupations with shared requirements. The routes were derived from the independent panel’s analysis of current labour market information and projections of future skills needs which were then reviewed with employers, academics and occupational bodies.

The technical education routes are based on related occupations rather than sectors. For example, the digital route includes IT business analyst/systems designer, programmer, software developer, IT technician, web designer, network administrator, most of whom are employed outside the IT sector. The panel argues that therefore these qualifications should be designed by occupation rather than by sector.

The independent panel distinguishes sharply between work experience which it understands to be students spending a week or two in a workplace gaining some sense of the world of work, and work placements which are structured, last much longer and are with an employer in an industry relevant to the student’s study program.

The panel and government believe that all students should have work experience in their first year following the technical option and that:

every 16–18 year old student following a two-year college-based technical education programme should be entitled to a high-quality, structured work placement. Successful completion of this work placement should be a requirement for full certification at the end of the study programme. As part of the work placement, the student, college and employer should complete a log book – ideally online – that evidences the key tasks that the student has undertaken and what they have learnt.

The Minister of State for Skills recommends that the Government provide additional funding to colleges of £500 ($850) for every student’s successfully completed placement, which the panel expects colleges to use to fund staff to organize work placements.

The Government and its independent panel on technical education are acutely aware that:

the last 50 years have seen almost continuous reform of technical education in this country, to little positive effect. Too often in the past we have seen governments change direction before a set of reforms could possibly have borne fruit, simply because the problems the reforms were designed to address still exist.

The process established by the Government, the panel’s report and the Government’s plan have been crafted carefully to attract cross-party support and policy stability.

The panel includes Alison Wolf, whose analyses of English vocational education have persuaded both Labour and Conservative Governments to make substantial changes. The panel was established by the Conservative Government, which appointed as its chair David Sainsbury who was the Labour Minister for Science and Innovation from 1998 to 2006.

English college education is rather different from college education in any Canadian province, it will be a while before it will be clear how successful the English plan may be, and in any case, the transfer or even borrowing of policies from other jurisdictions is much less successful than policy learning. Nonetheless, the Sainsbury report and the UK Government’s Post-16 Skills Plan for England offers some important understandings for Ontario.

Skolnik suggests that one of the reasons for Ontario colleges not fully following the European model is Ontario governments’ aversion to comprehensive planning of postsecondary education which is normally needed to maintain parallel tracks. Another is the lack of a close exemplar of the parallel model. While Ontario doesn’t seem likely to develop a master plan for postsecondary education any time soon, it is seeking to coordinate institutions’ profiles and futures through strategic mandate agreements which cumulatively could shape the development of the sectors.

And England’s two track post-16 education could become a powerful influence if it succeeds in its ambition of turning around England’s longstanding weakness in vocational education.