What to expect from the British white paper on higher education

Universities in the UK have long learned to live with what the late, great British professor of higher education and ideas David Watson called in 2012 “flux and contingency”, “national policy confusion” and the “pressures of a hyper-active political context”. All of these features of the British context have become even more salient with the release of “Success as a knowledge economy”, the British government’s May 2016 white paper on higher education. 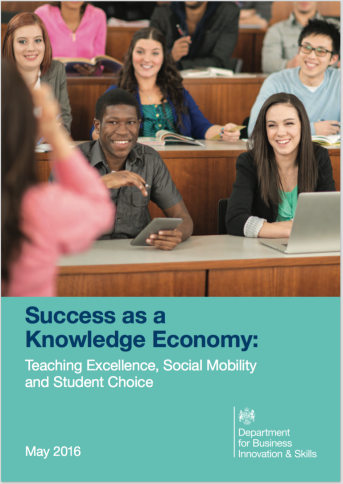 This is the first significant attempt at reform of the British higher education system since the Higher Education Act of 2004 from the centre left Labour Party that ruled from 1997-2010. Now free from the shackles of a five-year coalition with the left-leaning minority Liberal Democrats, this is an opportunity for the (mainly moderate) right-wing Conservative administration of David Cameron to make its mark on the higher education sector.

For some time now, universities have been subject to the direction of a central government department – of Business, Innovation & Skills – that doesn’t even feature education in its name. The white paper clearly positions universities as corporate institutions, nominally free to pursue their own objectives but increasingly restrained by demands for accountability from the state.

The key words are the first and last in the white paper’s title: success and economy. “Success” can be equated with “competitiveness” – the words competition and competitiveness appear no fewer than 60 times in the document. And “economy” suggests a turn towards the financial benefits of higher education. The white paper conceives of higher education as a marketplace, as the language around competition – primarily intended to spur universities into recruitment action – makes clear.

This is a white paper almost entirely concerned with measurements and outputs. On the former, the white paper extends proposals to create a Teaching Excellence Framework (TEF), an attempt to mirror the country’s longstanding Research Excellence Framework (REF). The TEF is intended to improve quality and choice, but it is hard to see how a series of metrics assessing teaching will offer a comprehensive uplift in both of these areas, as Joanna Williams has pointed out in Times Higher Education.

In terms of outputs, the white paper seeks to identify what it will take to produce graduates who will occupy the jobs that will contribute to Britain’s economic standing. These outputs are a means of justifying the cost of tuition, now burdened increasingly by students, but make little real inroad into the social justice agenda in which the Prime Minister is pitching the paper, as The Guardian has observed.

Efficiency also emerges as important to policy thinking on higher education. This can be seen in the proposed merger of the seven UK Research Councils into a single body, UK Research and Innovation, and the creation of a new Office for Students bringing together some of the functions of the existing Higher Education Funding Council for England and the Office for Fair Access. Some useful early comments on this can be found on the Universities UK blog.

Reactions from university bodies, higher education organizations and the media in the UK have ranged from polite to outright critical. Education consultant Mike Boxall asserts that the white paper “redraws three fundamental relationships that have defined higher education in the UK for 100 years: with the state, with students and with research”. In all three areas, there is no doubt that this redrawn relationship will become more marketized and distant.

The more marketized relationship comes through the emphasis on competition, where for-profit providers are pitted against public universities in an atmosphere intended to engender competition – for students, for prestige and for funding. This is framed through points both on “student choice” and on provisions that would allow new providers to enter the market. Although unspecified in the white paper, it would be consistent with previous government thinking to assume that these providers would be located in the private sector.

The distance arises less from the lack of consultation with universities about the impending reforms and more out a growing sense that the government is not listening to the sector as it implements its vision for a “one-nation Britain”.  Although the government did make efforts to consult in the earlier green paper stage, many are concerned that the subsequent opportunities to engage in constructive discussion on the future of higher education will be limited.

A more marketized and distant relationship between the state and the higher education sector allows politics to shape the fundamental purpose and place of higher education in the UK. This leaves British universities at a crossroads: they can choose to accept the government’s new prescriptions and watch the landscape change around them, or they can actively take responsibility to engage with each other and with the state to advocate for a system that values “knowledge” as much as, if not more so, than “economy”.